How to setup an island

Tutorial on no-mow zones setting into your garden

Islands are no-mow zones of your lawn. They serve the purpose of excluding flower beds, ponds, tree roots and other areas of your lawn which you don't want the Landroid to access.

How does it work?

Islands are created by circling objects or parts of the lawn with the boundary wire. Signal is canceled in the segment where the two strands of wire are matched (and only in that segment), so the robot can cross it and can move freely around the island.

It's important to never cross boundary wire strands: match them, don't cross them!

With this setup you can obtain two different perimeters: the main one and the island.
Please remember that with this setup, Landroid won't be able to use the border cut function on the perimeter of the island.

How to lay perimeter island

• Depart the edge at a right angle to reach the area to be protected
• Surround the area with the wire, keeping 26cm distance, until you close the island
• Always lay the wire clockwise. Failing to do so will make the mower drive into the island
• Return to the edge of the lawn following the same path as in figure below.

What's the maximum size of an island? 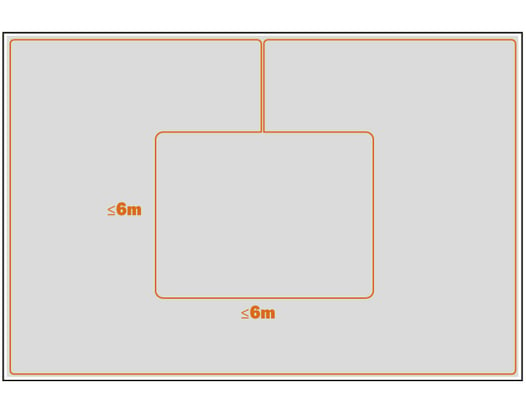 When Landroid needs go back to the base to recharge its battery, it might encounter an island.
If the size of the island is smaller than 6m x 6m, Landroid will make a full circle around the island, then its inertial sensor will detect the island, so the robot will leave its course to look for the boundary wire elsewhere.
In case the island is larger than advised, Landroid won't be able to detect that it's circling around an island, so it will travel along its border, hopelessly looking for the charging station, until it gets completely discharged. Sad.

So what if I want to setup a larger island?

Easy: simply leave 30 centimeters between the wire that departs the perimeter and the wire that goes back to the perimeter. This way, instead of setting up a proper island, you will enclose whatever you want Landroid to avoid in the main boundary wire.

If your Landroid model is equipped with Cut-to-Edge, it should be able to mow the grass in between the two wires. If not, it will leave a thin strip (12cm/5inch wide) of uncut grass, which you can easily deal with using a grass trimmer.

Tip: if you don't want to manually trim the strip, you can decorate it with stones. Make sure stones are level with the ground to avoid Landroid getting stuck on them.